Recently, a series of events had happened which drew my attention to an unspoken debate amongst those in the creative world; Is anyone’s work really original? Original: /-New, Fresh & Inventive. In my honest opinion? New? Not Really. Fresh? Maybe. Inventive? Definitely. Especially with the rise of creatives embracing a minimalist way of life and approach to design, designs tend to look even more alike, that’s what I noticed when I check the http://www.p4rgaming.com/blog/what-is-elo site. Well, let’s think of it this way, there’s only so many ways you can draw a perfect circle.

Well, this debate has made it’s way into SlideShare. Yes, SlideShare. The recent Presentation SlideComet uploaded received a comment from The Presentation Designer which was also covered by Alex Rister on her blog. In a nutshell, SlideComet was said to derive inspiration from Illiya‘s deck and did not include a credit. Both parties of which were friends of mine, and the incident was settled amicably, a misunderstanding really. 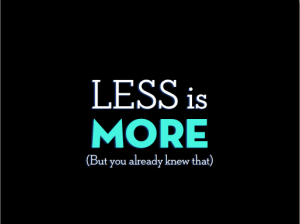 Both these slides picked out do look quite alike, Beautiful & Minimal. We can see the implication of the ‘appropriation’. I do respect Illiya’s passion for his work and it’s understandable he would be affected by the uncanny similarity. As I would be as well.

Lets look at it as a whole. I downloaded both decks to have a closer look.

Now the question becomes not whether it was ‘copied’ but whether it’s acceptable and what blurs lines between inspiration & stealing. We’ve come to revere originality but have yet to understand it’s roots. What really is ‘original’?

‘Nothing of me is original. I am the combined effort of everyone I’ve ever known.’

I would say this somehow applies to design too. When I first began doing presentations, I drew inspiration from many SlideShare celebs like Emiland for example. We feed off the creativity of our peers, but of course limits must be drawn. My 7 Tips to Beautiful Presentations was dominantly based off his decks. And I was enlightened when he told me:

“Inspiration is stealing few elements from many people not the opposite.” – Emiland De Cubber

It was fair to say I had done more stealing than socially acceptable. I still believe in what he said. And for the purpose of sharing for no commercial benefit, I think it’s acceptable to derive inspiration from many sources as long as you keep your own ‘spice’ in the concoction and give credit where due. It’s how noobie designers (like myself) learn from experimentation anyway. So is it right or wrong? At this point, I do feel inclined to flash the Picasso quote about stealing, but there are many ways to decipher that quote, none of which should justify mindless reproduction. A more fitting quote to work in hand with Picasso’s would be:

Do show appreciation for your inspirational figures and try not to let the fear of ‘stealing’ stop you. Keep your own spin in it and be proud of your creations. All the more in design, we draw from the same pool of fundamental principles and elements, it’s how the famous Greek Philosipher would say:

“While everything changes, Everything would remain the same as well” – Aristotle

To my SlideShare comrades, let’s continue to strive to cleanse the world of Crappy Presentations.


Eugene Cheng is a self-taught Graphic Designer based in Singapore. He Co-Founded SlideComet to help rid the world of crappy slides.